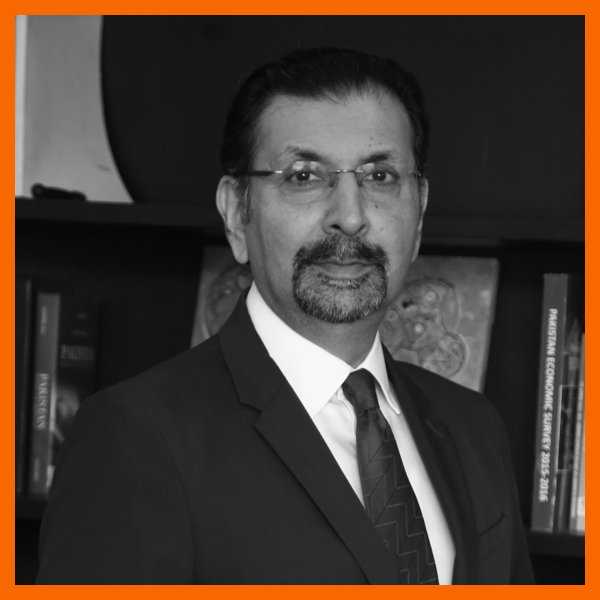 Mr. Farrukh Khan is the Chief Executive Officer (CEO) of Pakistan Stock Exchange Limited (PSX). He qualified as a Chartered Accountant from the Institute of Chartered Accountants in England and Wales, United Kingdom (UK), and also holds a BA (Hons.) in Economics and Finance from the University of Manchester.

With over 30 years of senior management and board-level experience, Farrukh is an experienced entrepreneur, and leading business and financial advisor who has advised on many landmark transactions.

Previously he has held senior positions with Acumen in Pakistan & the UK, including Country Director & CEO, Pakistan, Senior Director Business Development, Chief Business Development Officer and member of the Management Committee. Mr. Khan was the founding partner and CEO of BMA Capital Management Limited. Under his stewardship, BMA established itself as the leading investment banking group in Pakistan and received several international awards, including the 2010 Euromoney award for the best investment bank in Pakistan. His experience includes lead managing the US$813 million GDR offering and London listing of OGDCL, then Pakistan’s largest listed company, and successfully advising Etisalat on their $2.6 billion acquisition of Pak telecom, the largest mergers and acquisition transaction and the largest foreign direct investment in Pakistan’s history. Other historical transactions include the US$ 1.5bn privatisation of Kot Addu Power Company and the US$898 million GDR offering for Pak Telecom. He has advised, either on the buy or sell side, on almost 50% of all successful privatisations in Pakistan, totalling over $4bn in value. He has also worked with American Express Bank in Pakistan and Deloitte in London.

Mr. Khan has an excellent network and deep knowledge of global business and investments. He has previously served as President of Overseas Investors Chamber of Commerce & Industry (OICCI), Chairman of the Young Presidents’ Organization, Pakistan Chapter and on the boards of prominent public and private sector organisations. He was also associated with the Securities and Exchange Commission of Pakistan as a member of its Policy Board from 2018 to 2019. Mr. Khan was selected by Euromoney as one of the top 50 global financial leaders, below the age of 40 years. His philanthropic interests include children’s health and education.

Mr. Khan has been nominated by PSX to serve as Director on the Boards of National Clearing Company of Pakistan Limited and Pakistan Mercantile Exchange Limited. He is also serving as the Chairman of Voluntary De-Listing Committee of the Board.
Other